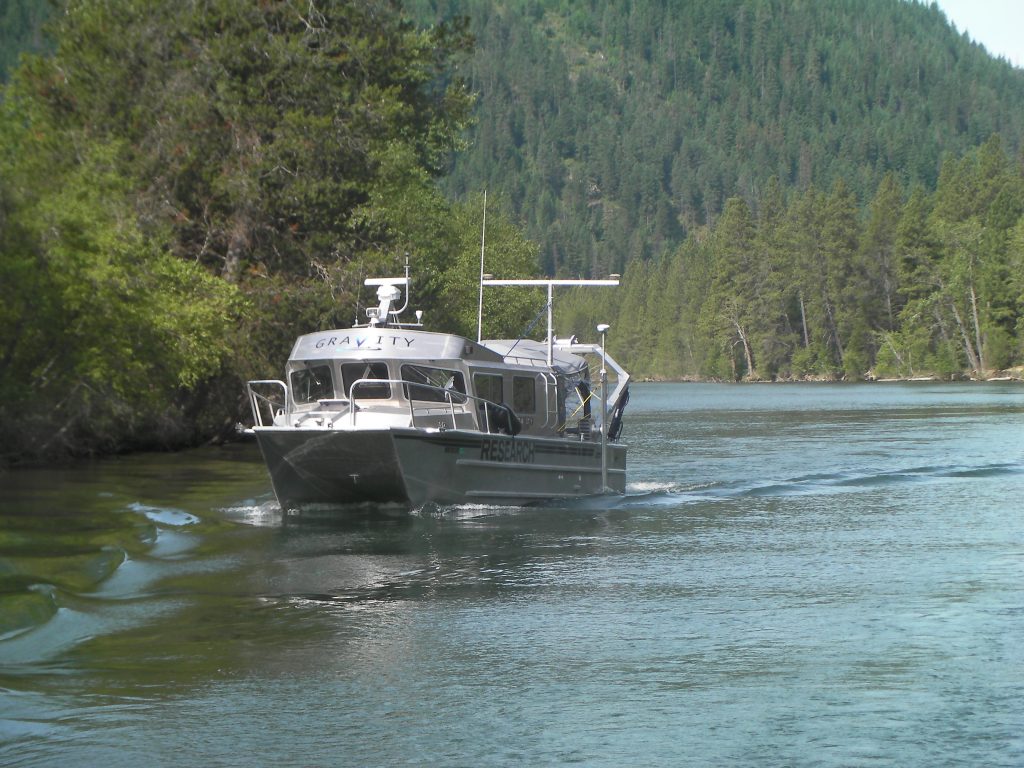 The Definition of Hydrography

In the most basic of descriptions, the term “Hydrography” defines the scientific discipline of measuring the physical characteristics and features of a body of water. Typically, hydrography is mostly discussed in terms of the classes of surveys to quantify physical features of interest within a water body (i.e., bathymetry surveys). However, the discipline of hydrography actually covers all the following areas;

Why do I need a Hydrographic Survey?

Most hydrographic surveys fall into one of two categories;

The majority of hydrographic surveys fall into the first category, a desire to understand and quantify the state of a physical feature on or below the seafloor. For simplicity, this document will focus on seafloor hydrographic surveys. Hydrodynamic and oceanographic focused surveys will be discussed in a separate post. 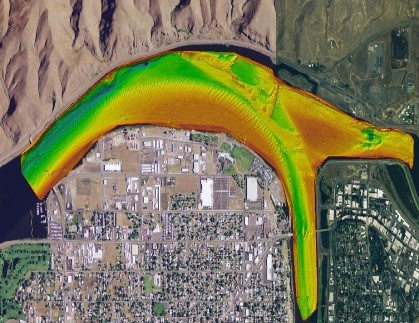 What type of Hydrographic survey do I need?

Before one can select the type of survey needed, they first need to identify the question being asked.

Understanding the objective of the survey plan helps to narrow down the type of survey needed and the type of hydrographic equipment to be specified.

When referring to seafloor hydrographic surveys, they typically fall into three categories;

Bathymetric surveys measure the water depth of a system and are useful for mapping navigable waterways, shipping channels, and for pre and post dredging analyses. Seafloor objects and features surveys are typically conducted to locate and delineate seafloor debris, objects, or structures. These surveys are useful for locating shipwrecks, seafloor debris (such as a disposed ordinance, derelict fishing gear), and can also be used to map habitat features such as logs, rock piles, and vegetation aggregations. Geophysical surveys are useful for determining the physical and geological composition of the seafloor. These surveys are conducted to understand the state of sediment composition below the seafloor that can’t be observed visually. Such surveys include identifying depths of subsurface sedimentation layers (sand/clay/bedrock), as well as the presence of ferrous objects and deposits.

Bathymetric surveys measure the water depth and, ultimately, the elevation of the sediment/water interface of any given body of water. This is done by the use of acoustic sonars, which measure the depth of water between the sonar and the bottom by the transmitting and receiving of acoustic energy waves. The distance between the sonar and the seafloor is measured by the time it takes for the acoustic energy to travel from the sonar, reflect off the bottom, and return to the sonar. Given that the speed of acoustic energy through water can be represented mathematically as a function of pressure and density, the time between the transmitting and receiving of the acoustic wave can be used to derive a distance value. Bathymetric surveys are used to measure navigation channels, map seafloor obstructions and features, and measure volumes of dredging projects.

The difference between a single beam echosounder (SBES) and a multibeam echosounder (MBES), is quite simply described in the products name. While an SBES is comprised of a single acoustic transducer, an MBES is an instrument containing hundreds and hundreds of beams formed during every single transmission. Both instruments have their pros and cons, and depending on the survey and data quality objectives, either system could be more advantageous.

How to choose between an SBES and MBES?

This depends on what the user wishes to obtain from the survey data. SBES is a great tool for lower resolution bathymetric surveys where some level of interpretation between points is acceptable. The mobilization of an SBES on a vessel is very simple, and the data processing much less arduous than an MBES survey. An SBES survey is great for measuring cross-sections of channels and rivers and can be used to survey large areas where the accuracy of interpolation between points is acceptable (i.e., general bathymetric morphology can be observed, but smaller features do not need to be measured).

MBES, on the other hand, is a very high accuracy and resolution survey, which can measure much smaller details of the bottom (i.e., scour, bedforms, structures…etc.). An MBES survey is necessary when a higher specified level of accuracy is required, and or interpolation between points is not desired, such as a navigation channel. An MBES system is more time consuming to install on a vessel, to calibrate, and to process the data, but the final products from these instruments can produce amazingly detailed datasets of the seafloor!

Side Scan Surveys and Object Detection

Side-scan sonars (SSS) are an effective tool for seafloor exploration for features and objects on the seafloor. While a bathymetric survey provides precise water depths, a SSS creates a precise acoustic image of the large areas on the seafloor. Instead of individual acoustic beams on a MBES which are averaged over a time series, a SSS emits a broad fan-shaped acoustic pulse from the sonar and listens for the entire return of the pulse. From this large acoustic pulse, the sonar takes the amplitude (strength) of the acoustic return and creates an acoustic image that can delineate objects on the seafloor in great detail. Sometimes referred to as an acoustic reflection, the intensity of the acoustic pulse can provide amazing detail of objects on the seafloor, usually in much greater detail compared to an MBES survey. This is because the sharpness of the boundaries of objects and structures (i.e., a derelict crab pot) can be captured accurately in an acoustic reflection, while the time-averaged data from a MBES or SBES may distort these boundaries. This property of a SSS makes it the ideal tool for object and feature detection on the seafloor. Additionally, with some site calibration, the SSS data can also be used to help identify types of bottom substrates and their horizontal distribution. The amplitude of the acoustic return can be correlated to different sediment types, as each substrate class absorbs and reflects acoustic energy uniquely. Acoustic data from these sonars have been used to also map and delineate different sediment types in all types of water bodies.

Another stark difference between SSS and MBES is the inability of the SSS to accurately record depth sounding data from the acoustic image. The horizontal referencing of the objects is accurate, based on the time it takes the acoustic pulse to travel to and from the sonar (similar to MBES and SBES), but the vertical distance to the seafloor is not reliable due to the amount of acoustic interference created by the large acoustic pulse. Technology has emerged over the last decade that can resolve the interference and record depth data from side-scan data. These sonars, called interferometric side scan sonars, can be used to collect both SSS and MBES data simultaneously, making them an efficient tool for object detection and bathymetric surveys.

SSS can be used in two main ways – either mounted to a pole on a vessel or towed behind a vessel via a strengthened cable. The distance of SSS from the seafloor impacts the overall resolution of the acoustic image. Surveys in open water where water depths are deeper, a towed SSS is the optimal application. This allows the sonar to get close to the bottom and increase the resolution if looking for smaller objects. A towed application, however, does have problems if your survey is either shallow or near marine infrastructure (i.e., harbors, breakwaters…etc). In this application, a pole-mounted SSS is an optimal approach. With a pole-mounted SSS, the sonar stays a fixed depth below water and can be protected from impact with both the bottom and hazardous objects.

Seismic and sub-bottom profilers (SBP) are used for exploring and measuring the presence and depth of geologic layers and features below the seafloor. They conduct this by emitting low-frequency acoustic energy through the water and into the sediment on the seafloor. The low frequency of the acoustic energy allows it to penetrate the seafloor, sometimes up to great depths. It does this by measuring the time it takes the energy to transmit to and from the sonar, as well as the relative strength of the return. Different sediment types will allow acoustic energy to travel through them at different speeds as well as absorb and reflect acoustic energy differently. The sonars are able to delineate the boundaries of different sediment types with high precision. These surveys are typically used to find the depth of certain geologic layers such as glacial clay, bedrock, as well as depths of softer depositional sediment overlaying harder condensed layers.

Other geophysical, hydrographic tools include marine magnetometers. These passively measure the strength of the earth’s magnetic field and can measure disturbances in the magnetic field caused by certain containing ferrous (iron/steel) material.

Magnetometers are typically towed behind a vessel and are useful for identifying and confirming the ferrous content of an object. They can also be used to identify ferrous objects buried beneath the sediment as well. Based on the size of the object and the amount of iron, a certain ferrous object will distort the earth’s background magnetic field at that specific location. This distortion is recorded by the instrument and can be used to identify objects. Magnetometers are used commonly to find derelict steel objects such as discarded steel drums, iron shipwrecks, pipelines, and unexploded ordinance.

Magnetometer surveys are best paired with an object detection survey such as SSS. During a SSS survey, all surface objects can be identified on the seafloor. With a magnetic survey over the same area and data compared, the surveyor can conclude which objects are both ferrous and non-ferrous. This technique optimizes the search effort for ferrous (and non-ferrous) objects.